Recently I’ve seen several conversation on-line about waterfall walks and which is the highest waterfall in England. It’s tempting to to intervene and state outright that Cautley Spout, which is only a mile or two from our caravan park at Cross Hall Farm, is the highest. But actually, I could be either right or wrong. It’s either the highest or not depending on whether we’re talking about the height of a single drop or about a cascade of falls. Cautley Spout is a cascade, tumbling down the eastern side of the Howgill Fells at Cautley for almost 600 feet. 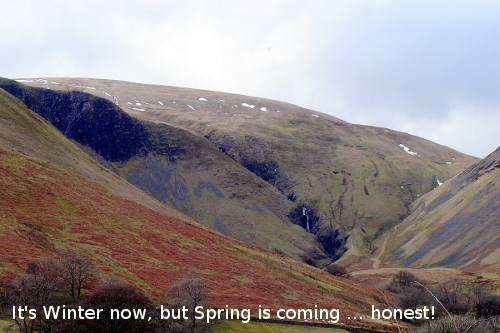 Yes, Cautley Spout is the highest waterfall in England, but if you’re looking for the longest single drop then from our campsite you’d need to drive or cycle east from Sedbergh and over the watershed into Wensleydale where Hardraw Force has an unbroken drop of around a hundred feet.

Cautley Spout and Hardraw Force are just two of the waterfalls in the Yorkshire Dales National Park that can be visited from Cross Hall Farm. There are more waterfall walks in Teesdale and as for Lake District waterfalls there are many that are accessible in day trips from Cautley.