Bob & Karen Brewer and family will be delighted to see you

Sedbergh and our Local Area

Here are some of the places in the near vicinity. As time goes on articles on our blog will elaborate on these short paragraphs, and describe many other places easily reachable from Cautley.

There’s much more to say about easily reached areas of the Lake District, the Eden Valley, the Yorkshire Dales and North Pennines as well as exploring further west toward the coast. Also we’ll not forget such popular attractions as the Settle-Carlisle and Wensleydale railways.

is our local town. It is rather quaint in places, with narrow streets and buildings that have served the local population for many generations. Probably it is best known for Sedbergh School, a boarding school that has turned out many eminent men over almost five centuries. Increasingly, though, Sedbergh is gaining a name as England’s “book town” and has a good variety of excellent bookshops. The Yorkshire Dales National Park has an information centre here.

Wensleydale is packed with magnificent walking country. There are waterfalls to visit, an heritage railway to ride and at Hawes a creamery and cheese factory to visit (with a great restaurant). These are just a few of Wensleydale’s treasures waiting to be explored.

has character, with its cobbled streets and white painted houses, and at the Dentdale Heritage Centre visitors you can look back to the working lives and social customs of the people who lived in the dale over past centuries. There are many very attractive walks in the area especially along the River Dee, a tributary of the Rawthey, and ultimately the Lune.

is an ancient market town well worth a visit. There’s the so-called “Devil’s Bridge” over the River Lune and behind the parish church is the magnificent Ruskin’s View, looking out over the Lune Valley. The town itself has many interesting shops and quaint corners.

is the main small town (or large village) of the upper Eden Valley. A popular stopping off point for walkers on the Coast to Coast route it also has a railway station on the famous Settle-Carlisle line. Kirkby Stephen participates in the ‘Walkers are Welcome’ scheme. There are high level walks to Nine Standards Rigg, Mallerstang Edge and Wild Boar Fell as well as lower level strolls along the Eden.

is the largest town in the immediate area and was previously the administrative centre for the old county of Westmorland. Although not itself in the national park, Kendal is often referred to as the ‘Gateway to the Lakes’. It has much of interest in its own right, including the Museum of Lakeland Life and the Brewery Arts Centre. Nearby are Sizergh Castle and Levens Hall.

Click here to see the latest entry on our blog. 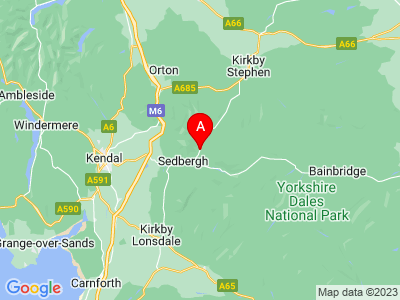 Click here for an update from the Met Office Weather Service

Cross Hall Farm lies at the foot of the Howgills, at Cautley near Sedbergh in the valley of the River Rawthey. Are you thinking of arranging a holiday in Cumbria? Camping can be a great way to get away from the crowds ... if you choose a quiet site, and that is what we have here at Cautley, a quiet family-owned site surrounded only by the hills.

Camping in the Howgills provides a great range of options for your holiday whether you just want to walk on the fells locally or travel around using this as your base. Although our address is Cumbria we are, through an historical quirk, located in the national park not of the Lake District but the Yorkshire Dales. Our Cautley camping field gives you easy access to walks on the Howgill Fells, to Wild Boar Fell and the Eden Valley while lakes such as Haweswater and Ullswater are not far away and Wensleydale is the nearest of the major Yorkshire Dales.

Camping at Cross Hall Farm has a lot to offer. There are many campsites in Cumbria for tents but not many that give such convenient access to such varied landscapes, from mountains in Cumbria to the moorlands of the North Pennines and the underground limestone caverns of Yorkshire.