Here on the Cross Hall Farm blog we try to give you plenty of ideas about where to go while staying here either caravanning or camping.

Kirkby Lonsdale is somewhere that many of our visitors enjoy. It is a small historic market town approximately fifteen miles south down the beautiful Lune valley. Indeed the River Lune will take centre stage on two of the photographs accompanying this short article. 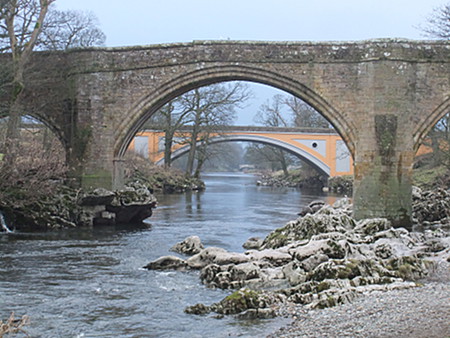 “Devil’s Bridge” Kirkby Lonsdale – with the modern road bridge behind

Possibly Kirkby Lonsdale’s best known feature its 12th century bridge over the River Lune (improved down the centuries of course, and now not used for traffic). It is one of many river bridges up and down England and Wales which have a medieval legend attached to them that led to being christened the Devil’s Bridge. Kirkby Lonsdale folk have for centuries told the tale of the old woman who allegedly outwitted the devil after he built the bridge for her.

“Many years ago, before there was a bridge in Kirkby Lonsdale, an old woman lived on the banks of the Lune and kept a few animals. One night her cow strayed across to the other side of the river and would not come back. In response to her predicament, the Devil appeared and promised to build a bridge by morning in exchange for a soul, the first to cross the bridge, thinking that it would be the woman herself. By morning the bridge was complete and the old woman agreed to fulfil her part of the bargain. She delved into her bag and threw a bun across the bridge, whereupon her small dog ran over to retrieve it. The devil, in a fit of rage at being thwarted, howled in anger and vanished leaving behind a smell of burning brimstone.”
Read more about Kirkby Lonsdale History on GoLakes

By the way, if you’re young and adventurous, you might be tempted to join in the popular sport of jumping from the bridge into the river. Please don’t. For many over the years it has proved fatal to jump from the Devil’s Bridge. Kirkby Lonsdale and its people do not want the sadness of yet another fatality. 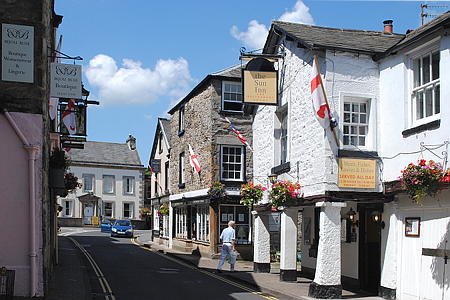 Walks around Kirkby Lonsdale can include the countryside, but it’s pleasant simply to wander around the old lanes, not sticking to the main streets with the shops but drifting off into odd corners where you’ll find genuine olde worlde charm.

Walk down through the churchyard and take a look at Ruskins view. The famous nineteenth century philosopher and art critic John Ruskin considered this the most perfect example of a landscape view in England. Nowadays many thousands of people every year visit this spot and look down over the River Lune and the pasture land beyond it. Whether it is to be praised as highly as Ruskin thought we can leave you to decide, but there’s no doubt this is a beautiful spot.

The artist Turner obviously thought it was something special. He painted the scene, and just a few years ago it sold at Bonhams in London for over £200,000. Whether the viewpoint at the back of the Kirkby Lonsdale churchyard became known as Ruskin’s View before or after Turner painted it is from time to time a matter of scholarly debate.

From the Ruskins View viewpoint there are pleasant walks in both directions following the line of the river, either by Underley Park to the north or downstream to Devil’s Bridge, and in both cases back along the road into town. On a sunny afternoon Kirkby Lonsdale has much to offer the visitor looking simply to relax in pleasant surroundings.

So then, while you’re at Cautley camping, a trip out to Kirkby Lonsdale could give you an enjoyable afternoon.