Next post: Explore Dentdale and Dent Village while at Cross Hall Farm

What and Where are the Howgills?

The Howgills, or Howgill Fells, are a range of hills between the Lake District mountains and the moors and valleys of the northern Yorkshire Dales. They are almost entirely surrounded by two rivers, the Lune to the north and west, and the Rawthey (a tributary of the Lune) to the east.

In terms of roads they are bounded by the M6, the A685 (Tebay to Kirkby Stephen) and the A683 (Sedbergh to Kirby Stephen). To many the Howgills are known only as the rounded hills by the M6 near Tebay. Similar views are seen from the West Coast mainline trains. For almost a century until around forty years ago the Kirkby Lonsdale to Tebay line used to cross the Lowgill viaduct shown above with the Howgills behind. The track is long gone but the viaduct remains, protected as a Grade II listed building.

Walkers on the Howgills need not expect to meet many other people. The waterfall at Cautley Spout is quite popular on busy weekends but otherwise it is possible here to get out onto the fells and never see another soul for hours on end. Tebay to the north and Sedbergh to the south are often starting-off points, and also the villages of Ravenstonedale and Newbiggin-on-Lune.

Although entirely in the county of Cumbria the southern not-quite-half of the Howgills are in the Yorkshire Dales National Park. When the Park was created Cumbria did not exist and although the southern area was in Yorkshire’s West Riding the northern hills were in Westmorland. Attempts have been made to expand the national park to cover them all but as of this article being written the government has not yet made a decision. 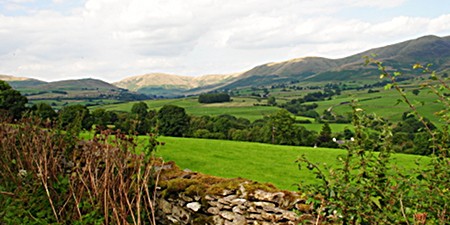 Their rounded summits separated by steep sided valleys as seen from several directions have often caused the Howgills to be likened to a herd of sleeping elephants. There is excellent walking country here, especially in the northern areas, but take care, brush up on your map-reading. It is easy to get lost in areas with no marked paths and where many of the peaks and valleys look very similar to each other. We really would like to see you back at our Cautley campsite without having to alert the mountain rescue team.

And finally, a February view of the Howgills from the A683 roadside just outside Sedbergh.